Good fences make good neighbours, as the saying goes, but good fences, especially large ones or very plain ones, can also make a property look a bit drab or even downright industrial. One way to tone down that unsightly look is to combine landscaping with fencing, so that you have lots of lush greenery while also having a secure fence and boundary between neighbours. If you're not sure how to combine landscaping with residential fencing, note a few tips and suggestions you can discuss with both a landscaper and a fencing contractor.

You might have a certain area of your yard with special landscaping features, such as a small landscaping tree or a nice flowerbed. Use a different material of fence in that area to highlight that landscaping; for example, a few tall wood panels that create a corner behind the landscaping can anchor that feature and provide a nice backdrop for it. You can use wood panels in other sections of the fence to create a cohesive look, or, if the entire fence is wood, make these particular panels taller so they stand out.

Consider replacing sections of fencing with hedges to combine the two looks. Try boxwood for a thick and manicured look, or any type of yew bush. Remove some sections of fencing and plant these bushes instead, and let them grow to be thick and dense. This is especially good to do if you have a large yard and fence, as the hedges will break up the look of the fence so it doesn't seem too imposing. At the same time, you won't have a full border of hedges that need constant trimming and care, but will only need to tend to a few sections of shrubs.

Greenery on the fence

You can literally combine landscaping and fencing by putting greenery right on the fence. For example, if you have a wood fence or concrete wall, you can drill holes to hold planters for hanging flowers. There are also outdoor hanging planters that clip over the horizontal top posts of a metal fence. Climbing vines can be planted at the base of a chain link fence and allowed to grow through those links, or through the slats of a wood fence. Putting greenery right on the fence can soften its look, and adding hanging flowerpots makes it easier to grow flowers if your property's soil is not healthy or you struggle with tending to flowerbeds 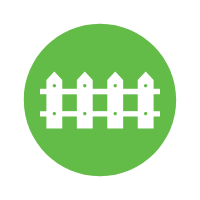 Most homes have a fence around them to clearly define the property boundary. However, when moving into a home where you don't like the style of the fence, what options do you have? Removing it and building a new fence is one option, but what happens if that option does not suit your budget? That's where you look for advice on how to change the look of a fence while sticking to a budget. You can find this advice right here. From painting Colorbond fences to growing vines over chainlink fences, there are plenty of ways you can make your fence look more desirable to you without spending a fortune.